ENVIRONMENTAL THREATS
As in all areas of the world, there is a need for effective management of East Africa's natural resources. However, the population is rapidly increasing, nearing 240 million in Tanzania, Kenya, Uganda, Rwanda, and Burundi alone. Meanwhile, more people are moving into urban areas.

Marine/coastal ecosystems support human well being and provide important economic services; therefore, destruction of these ecosystems puts the livelihoods of millions of coastal inhabitants in jeopardy. Even so, governments barely enforce even rudimentary environmental good practices. They allow wanton devastation of forests, swamps, and wetlands to continue entirely unchecked.  Sadly, the coastal/marine environments are bearing the brunt of ongoing degradation and long-term consequences that will be difficult to reverse if left unchecked.

Indeed, the continued well being of East Africa’s coasts and their peoples will depend on how well marine biodiversity and resources are conserved and managed. There is a clear, urgent need to bring about environmental awareness in East Africa. External assistance, in the form of funding environmental reform efforts and educating East African communities, is absolutely essential to preserve the area’s coastal/marine resources and implement sustainable resource management. 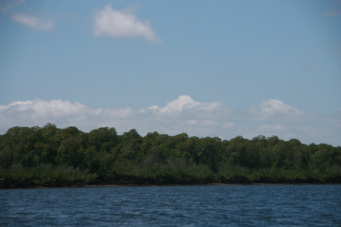 Healthy, protected mangrove forest, Lamu, Kenya.
﻿Mangrove forests provide sheltered areas needed by juvenile fish and other marine organisms as well as other wildlife and enhance biodiversity in neighboring habitats, such as coral reefs. Further, mangroves are important to many animals not exclusively associated with mangrove areas, including endangered species such as the dugong, several species of marine turtle, and different species of porpoise. Mangroves also provide an important habitat for migratory birds, as well as terrestrial wildlife.

In addition to supporting both terrestrial and marine species, mangroves protect river systems, stabilize shorelines, and help to filter and clean water. The destruction of these forests has resulted in a dramatic increase in coastal erosion and a significant decline in fisheries.

Further, mangroves play an important rol  in carbon sequestration, a potent tool for mitigating climate change. This is important because global climate change has already altered rainfall patterns in East Africa, leading to floods and droughts, putting millions of people at risk.  Some major causes ﻿ 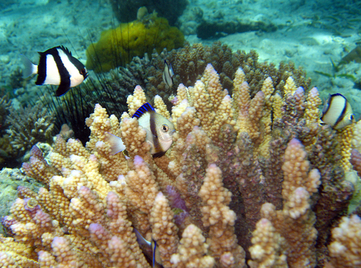 Healthy coral reef, Zanzibar.
Coral reefs support thousands of species in what many describe as the “rainforests of the seas.” Reefs are home to one quarter of the ocean’s biodiversity even though they cover only a tiny percentage of the ocean floor. Nealy 1500 species of reef-building coral alone make up their infrastructure.

In a sense, coral reefs represent a microcosm of the ocean at large. Like the ocean, reefs have immense economic value for local communities who depend directly on them for eco-tourism and indirectly for the fish that swim on or around reefs. Perhaps the greatest and most unsung value of the reefs are the medicinal benefits that we are just beginning to explore and understand. Like rainforests, reefs have an array of unknown compounds with promising medical applications.

Coral reefs have been under significant threat. Stresses, with results that can range from negligible to catastrophic, are both natural and human-induced. Human-induced threats come in the form of agricultural and industrial runoff, increased sedimentation from land clearing, and human sewage and toxic discharges. Many land-based activities have important implications for reefs. Agricultural activities, for instance, can introduce herbicides, pesticides, fertilizers, and runoff from animal feed lots. Sewage discharges can introduce nitrogen and phosphate compounds, along with pathogens and mixtures of toxins.

Uncontrolled land clearing often leads to erosion, resulting in an increase in sediment loads to surface waters. Roadways, parking lots, and buildings consist of impervious surfaces that increase runoff rates, and that runoff carries mixtures of dissolved substances into surface waters. The surface waters in any watershed eventually discharge into coastal or near-coastal waters. These waters can then negatively affect coral communities associated with the discharge points. Thus, activities occurring in distant locations impact reefs which are far away from these activities.

Eco-tourism is recognized as an important source of revenue for local economies; yet, threats to coral reefs, a major attraction, go unchecked. Although reefs display a surprising adaptation to short-term natural catastrophic events, they are not well adapted to survive exposure to long-term stress. Most people are aware of the destruction of rainforests and other above-ground habitats, but we do not always think about the devastation under the sea. Though they cover only a small percentage of the ocean floors, tropical coral reefs have an estimated yearly economic value of about US$30 billion annually in global goods and services. 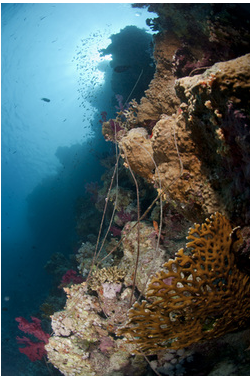 The exotic tropical fish that swim on reefs are in high demand as pets, as well. Poachers use either dynamite or cyanide to stun the fish, causing damage to the reefs without regard for other organisms that make their home there.The seriousness of such human activity is demonstrated by the fact that destructive fishing methods have resulted in threats to endangered and threatened marine species such as dugongs and sea turtles. The dugong occurred in large numbers off Kenya before the 1960s. This species declined significantly due to incidental catches in gill nets. Currently, dugongs still exist, but in small numbers, especially off the Tana delta area, in the Lamu archipelago, and in Kiunga and several locations in Tanzania, especially the southern region around the Rufiji River Delta.

There are many causes of local and global coral loss today; however, human-induced climate change is one of the main threats. Global climate change has negative impacts on tropical coral reefs. These impacts include:

CORAL BLEACHING: Reef-building corals contain plant-like organisms called zooxanthellae that live symbiotically within their tissues. Zooxanthellae provide their coral host with food and oxygen, and, in return, the zooxanthellae receive nutrients and carbon dioxide. When ocean temperatures increase even a degree or two warmer than usual, this critical symbiotic relationship breaks down and the zooxanthellae are expelled, leading to a bleached appearance, and often the coral’s death. Global warming has caused coral bleaching in much of the western Pacific and Indian Oceans, leading to mass coral mortality in many countries.


OCEAN ACIDIFICATION: Long-term global climate change is causing the world’s oceans to become more acidic. A quarter of the carbon dioxide produced by the burning of fossil fuels enters the ocean and reacts with water to form carbonic acid, acidifying the ocean, which makes it more difficult for corals to secrete their calcium carbonate skeleton.

Sewage discharge into a mangrove forest
Discharge of Untreated Domestic and Industrial Waste.
Pollution in East Africa is extensive, caused by such factors as the unregulated discharge of industrial waste, untreated sewage, pesticide-laced runoff from farms, herbicides and fertilizers, and the unfettered disposal of plastic waste. Direct discharge of domestic sewage from many point sources into mangrove forests or the open sea water is not uncommon. Many industries along the coast, as well as upcountry industries, whose effluent is carried by rivers into the ocean, do not treat their effluents, and, as a result, heavy metals and other toxic chemicals are discharged into the marine environment through run-off, hence increasing the Biological Oxygen Demand (BOD), leading to eutrophication in some areas.

Indiscriminate and Widespread Disposal of Garbage: 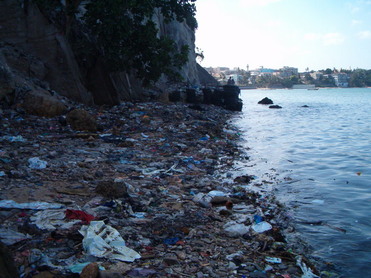 Pollution - Garbage in the Ocean, Mombasa, Kenya
Garbage lines the streets and saturates lakes and rivers. Much of this waste ultimately ends up in the ocean. East African cities lack adequate waste handling and disposal facilities; therefore, all of this waste has become a serious environmental threat.

Plastic bags and other trash end up in our world’s oceans every year. These and other single-use disposable items find their way into the water when they fall out of trash cans or are dropped on the ground by litterbugs. When it rains, these items are washed into local streams that feed into the water. It does not matter where the trash originates, because it all ends up in the ocean. Large plastic items entangle and suffocate animals. In addition, some plastics such as water bottles may be mistaken for prey by some animals, which may end up ingesting them and suffering serious harm. Some turtles, for instance, mistake plastics for jellyfish, or sea birds mistake plastics for sardines.

But the problems do not end there. Plastic and other petroleum products do not ever completely break down, but they do photo-degrade when they are exposed to the sun’s rays for a prolonged period of time. Photo-degradation results in many tiny pieces of plastic (so-called microplastics) floating around the ocean gyres, or currents, thousands of miles from shore. Microplastics cause great concern because they are ingested by many marine organisms. The effects of these microplastics is potentially devastating, and not yet fully understood.

While it may be easy to put these out-of-sight problems out of our minds, we will not be able to do so for much longer. In particular, discarded plastic beverage bottles are ubiquitous, choking entire water bodies. Attesting to this phenomenon, a 2009 United Nations report on ocean pollution noted that plastic bottles accounted for more than 80% of the total garbage collected from major oceans. 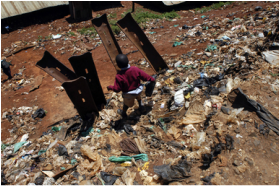 Child walking through trash in Kenya
Serious environmental and health threats are posed by waste imported from industrialized nations. East Africa receives hundreds of container-loads of e-waste each month from developed countries. In fact, with the increase in consumption of electronic products, the amount of electronic waste discarded globally has skyrocketed to 20-50 million tons annually. These items, disguised as “donations,” can be found in piles throughout the countryside, clogging dump sites and saturating lakes, rivers, and swamps.


In addition to imported e-waste, there has been an increase in consumer electronics use by East Africans themselves. For example, in the last decade mobile phone use in East Africa has proliferated to over 50 million phones. Dump sites are literally overflowing with electronic waste, including mobile phones, obsolete television sets, computers, and batteries--all containing harmful substances. Toxins produced by this waste leach through the soil to the water tables below, and poisonous runoff forms rivulets that flow ultimately into the ocean.


At the same time, the local people (particularly children) traverse these dump sites on a daily basis, putting their lives at risk of contracting cancer, respiratory ailments, and skin diseases due to lead, cadmium, and mercury, all poisonous  by-products of the electronic waste. 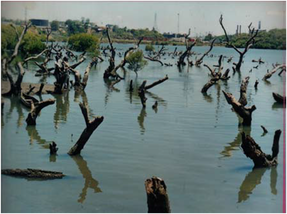 Mangove dieback due to oil spill, Makupa Kenya. PHOTO CREDIT: J. Kamau
Pollution enters waterways in many ways, shapes, and forms, such as huge oil spills that wreak havoc on marine habitats. Road runoff, illegal dumping, and cruise ships are major sources of the 700 million gallons of oil that annually flow into the oceans.

Cumulative Environmental Impact
In short, the cumulative environmental impact of exponential population increase, over-exploitation of natural resources, and destructive practices in resource use have physically altered and degraded entire habitats, leading to losses in biodiversity and, indeed, the extinction of entire species. Equally pervasive and more disturbing, widespread pollution poses a toxic threat to coastal/marine habitats and, more generally, to the East African people. The environmental damage being caused is just too severe, the losses too great, the causes of degradation too monumental, and the task to repair the damage too daunting to expect East Africa to deal with alone.

If environmental degradation continues unchecked, the impact on East Africans will only worsen. Clearly, there is an urgent need to bring about environmental awareness in East Africa and globally, in a collaborative effort to preserve East Africa’s coastal/marine environments. Further, there is a need to educate regional and global populations about East Africa’s failing coastal and marine habitats, as the failure of these ecosystems has broad implications.

learn more about these important issues:

Dynamite and Cyanide Fishing
Seashores of East Africa, Rising Temperature
NOTE: Copyright for this video belongs to the copyright owners. The views contained within this video do not necessarily represent the views of Kaskazi Environmental Alliance unless explicitly stated otherwise.