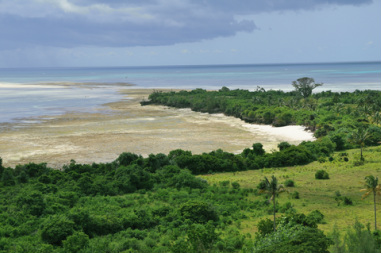 East African coastline, Pemba Zanzibar
Coastal East Africa stretches for 2,900 miles from northern Kenya through Tanzania and Mozambique. There are few places on Earth that can match the vibrancy and diversity of life found here. The region boasts a variety of landscapes, including mangrove forests, sea grass beds, coral reefs, and a multitude of island archipelagos. These ecosystems support an abundance of plant and animal life.

More specifically, the coastal waters of East Africa sustain a great variety of ecologically important species, including 350 species of fish and 40 classes of corals, 5 species of sea turtles, and 35 species of marine mammals, including whales, dolphins, and the endangered dugong. According to WWF, the East African coastline (northern Kenya through Tanzania and Mozambique) harbors about 64.3 million acres of the coastal forests (including mangroves), slightly larger than the state of Oregon. In total, mangroves and other marine ecosystems constitute 192 million acres of coastal East Africa, almost twice the size of the state of California.

The coastal communities of Eastern Africa--over 30 million in population--have a strong cultural heritage with rich traditions, and their livelihoods and health are directly connected to natural resources. It is for this reason that East Africa's coastal region boasts an enormously vibrant culture, hosting multiple UNESCO world heritage sites throughout the region.

NOTE: Copyright for this video belongs to the copyright owners. The views contained within this video do not necessarily represent the views of Kaskazi Environmental Alliance unless explicitly stated otherwise. 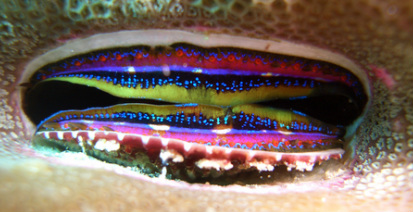 Reefs are home to one quarter of the ocean’s biodiversity even though they only cover a tiny percentage of the ocean floor. Nealy 1500 species of reef-building coral, coraline algae, and other sedentary animal species make up their infrastructure. The reef itself is actually a component of a larger ecosystem. The coral community comprises a system that includes a collection of biological communities, representing one of the most diverse ecosystems in the world. For this reason, coral reefs often are referred to as the "rainforests of the oceans."

In a sense, coral reefs represent a microcosm of the ocean at large. Like the ocean, reefs have immense economic value for local communities who depend indirectly on them for eco-tourism and directly for the fish that swim in or around reefs.

Sandy beaches, rocky shores, tide pools, and coastal mud flats of coastal East Africa provide feeding and breeding areas for multitudes of fish, invertebrates, and about 35 species of resident and migratory seabirds. Between October and March each year, hundreds of thousands of shorebirds fly from their breeding grounds in northern Europe to feed on the mud flats of the large mangrove estuaries of Lamu in Kenya, and the Rufiji River in Tanzania. 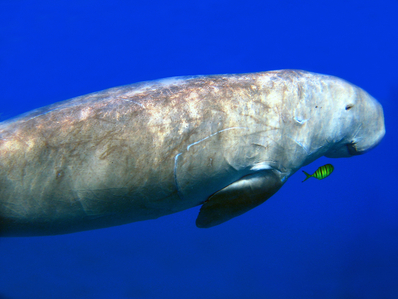 Dugongs
Dugongs are large grey mammals which spend their entire lives in the sea. Fully grown, they may be 3m long and weigh 400kg. They have a thick layer of fat, giving them a distinctly rotund posture, small paddle-like flippers positioned far forward on the body, and a broad, flattened, powerful tail that resembles the tail of a whale. They have nostrils near the top of their snouts.

Dugongs live in warm, shallow waters and sheltered bays and lagoons less than 5m (16f) deep. They feed primarily on sea grasses. For this reason, they are sometimes called "sea cows." In Kenya, large dugong herds were reported frequently before the 1960s. According to World Wildlife Federation (WWF) 2004 data, the exact numbers of dugong in Kenya are not known; however, a small number of dugongs has been spotted in the Lamu Archipelago (northern Kenya). 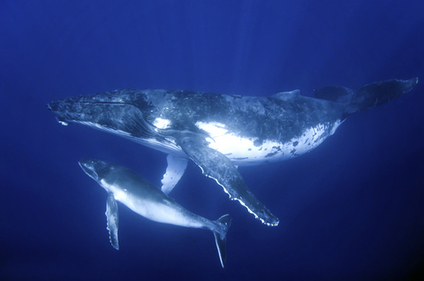 Unfortunately, what nature managed to preserve, mankind has increasingly endangered. Currently, East Africa coastal/marine resources are seriously threatened by human activities, notably the rapidly growing economies and populations in this region. These are driving massive changes in the landscape, such as forest clearance and agricultural intensification, causing increased sedimentation and pollution from agricultural chemicals.

Massive urban expansion has also led to serious pollution problems close to urban centers. Fishing pressures are ubiquitous, with chronic over-fishing for both local consumption and export, the highest rate of blast fishing (fishing with explosives) in the world, and over-fishing of target species even in remote parts of the region—all of which are leading to endemic species extinction.

Further, mangrove trees that once lined the East African coastlines are being destroyed for commercial use at an alarming rate. Mangroves occupy the largest area of coastal habitats, growing along the outer rim of the coastline to form a narrow fringe between land and sea, stabilizing the shoreline. Mangrove forests are one of the most productive and bio-diverse wetlands on earth. Yet, these exceptional coastal tropical forests, among the most threatened habitats in the world, are disappearing more quickly than inland tropical rainforests.  When exposed at low tide, the mangrove forests teem with crabs, worms, and snails, many of which are food for birds. At high tide, mangrove forests attract hundreds of species of fish, crabs, and shrimps, which depend on the forests as feeding areas and nursery grounds for their young. The destruction of mangrove forests has been devastating, making implementing conservation and management vital. KEA is working to conserve these important habitats and thousands of unique species in Coastal East Africa so that the people who live here will be able to sustain their livelihoods and lift themselves out of extreme poverty.